Ivorian strikers are invariably compared to the iconic Didier Drogba, but Lacina Traore shares a frame more similar to former England striker Peter Crouch! Tall, fast and good on the ball, his physical presence made him hard to miss when he ws playing football on the streets of Abidjan as a 17-year-old.

It was there where he was discovered by CFR Cluj president Iuliu Muresan, after spending time at the well-known ASEC Mimosas academy; established by Jean-Marc Guillou, who was a close friend of Arsene Wenger.

The academy has produced a host of Ivorian talent over the years, including players like Yaya and Kolo Toure, Emmanuel Eboue, and Gervinho.

Unlike many other successful students, he was never directly offered to a European team, which allowed CFR Cluj to step in and pick him up for next to nothing.

Lacina comes from a huge family, he has 17 siblings! His brother Lajo is also a professional footballer in Lithuania, where he plays for FK Riteriai, after initially being brought over to CFR Cluj by Lacina. Another brother, Messa, also had a brief spell playing in Romania.

Looking for that special Everton Gift? Take a look at the dedicated Everton Fan Gifts site for the latest reviews, shopping advice and links to the best products in the market. With new items are added daily, reviews are helpful and informative this should be your #1 destination. They have everything from the latest and classic Shirt as well as memorabilia, toys and gifts.

It was at CFR Cluj that Traore caught the eye of former Chelsea star Dan Petrescu, who would later play a huge part in introducing Traore to the Russian Premier League, when he eventually signed for modest Russian outfit Kuban Krasnodar, at the beginning of 2010.

My transfer was his idea, to help me grow and develop my career. I used to tell them ‘guys, it is even hotter here in Krasnodar than in some parts of Africa!’

My best football was in Russia with FC Kuban Krasnodar.

Traore had a very decent few years in Russia, notching 31 goals in 67 appearances for both Krasnodar and then Anzhi Makhachkala, where he formed a fruitful partnership with another former Everton striker – Samuel Eto’o; most notably scoring a glorious lobbed goal against Liverpool in Anzhi’s 1-0 win in the Europa League. 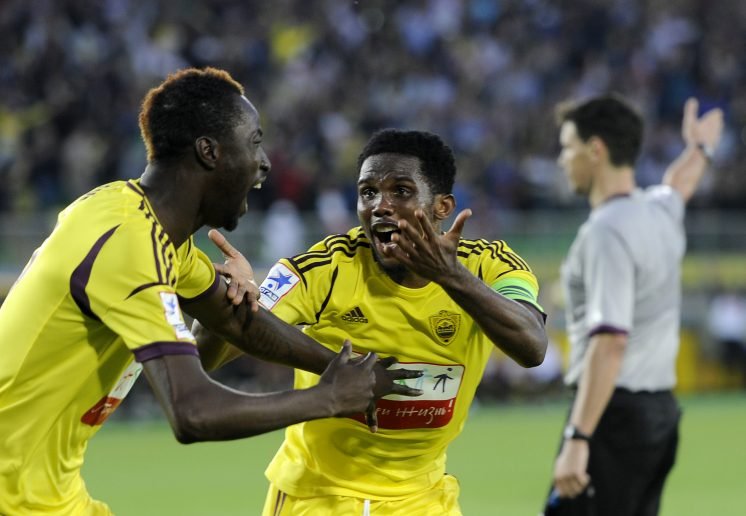 His time in Russia wasn’t without controversy though. Perhaps surprisingly, given his huge physical frame, he gained a reputation in the Russian Premier League for diving! There was a particularly high profile incident in 2013, during the first game of the season against Lokomotiv Moscow. It was late in injury time when former Tottenham striker Roman Pavlyuchenko struck a devastating equaliser for Lokomotiv, only for Traore to dramatically fall to the floor moments later in the penalty area, under a supposed challenge from another former Spurs player, Vedran Corluka. Most onlookers were stunned to see the ref point to the spot, but as it happened, Samuel Eto’o went on to miss the spot-kick, justice was done, in most people’s eyes. Traore was also sent off in a Europa League game, getting a second yellow card for diving.

Never far from the sporting headlines in Russia, he had an up and down relationship with the Anzhi fans at the time. His form was unpredictable; he looked unplayable one week but would be missing in action the next. Was he lazy? Was motivation a problem? Anzhi fans even accused him of faking injuries at times. 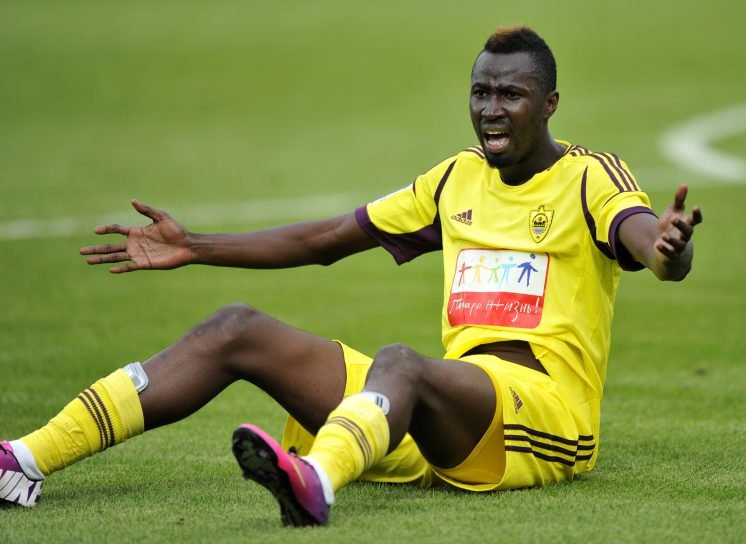 One injury he cannot be accused of faking was the one that devastated him shortly after his debut for Everton in the Premier League.

The English Premier League was always my dream, when I got to Everton and I scored my first goal I was so proud of myself. Then, unfortunately, I got hurt…

I can tell it still frustrates him to this day.

We all know the tale; Traore scored just four minutes into his debut for Everton in an FA Cup game against Swansea, a clever backheel set the Blues on their way to victory, and Traore was in line to start the following game against Chelsea. Traore then devastatingly went on to tear his hamstring in the warm-up, and would not be seen again in a blue shirt until the final game of the season against Hull, coming on as a late substitute.

The Everton fans were fantastic, and also my teammates. When I scored my first goal and all of them jumped on me, it was amazing! Yes, I only had a short stay at Everton, but it feels like a very long time in my head. I still dream of returning to the Premier League, I still believe in it. 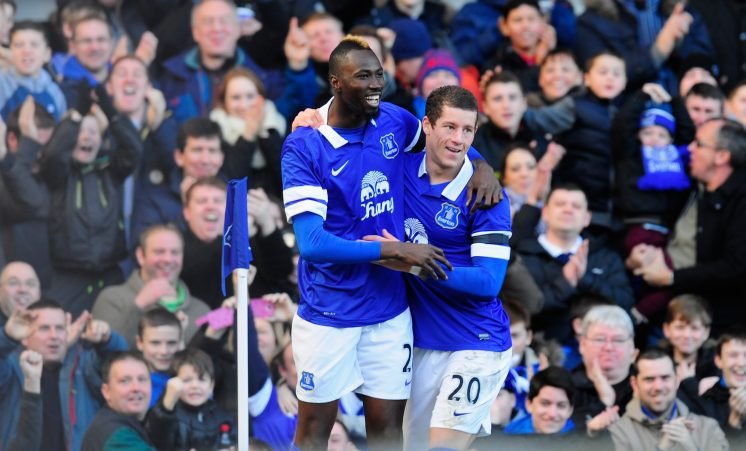 Traore, at the time, was an exotic solution to Everton’s striking shortage, following the long term injury to Arouna Kone and the departure of Nikica Jelavic. His loan move to Everton almost didn’t happen though, for a number of reasons. West Ham were publicly interested in him, and even went through the effort of securing a speculative work permit for his arrival. Then after choosing Everton, Monaco striker Falcao suffered a season-ending injury, throwing the loan move into doubt, but Claudio Ranieri signed the move off, much to the delight of Traore and Roberto Martinez.

The style of Everton suited my technical ability. I looked at the styles of play of the two teams we are talking about and the way in which Everton play is more of a passing side. It was quite close but Everton was my choice.

After the disappointment of his loan spell on Merseyside, there was talk at the time that Everton would like to extend Traore’s loan for a further season. Roberto Martinez told the Liverpool Echo at the time: ‘Lacina is someone we really believe can bring something different to the team and he is someone we will try to see if we can get an opportunity to sit down and see what is the next chapter.’

That extension never developed, Traore returned to Monaco and would then go on to make a number of moves around Europe, with stopovers in France, Spain, Russia, Hungary and back to where it all began in Romania, where he is back in a CFR Cluj shirt. Still only 30 years of age, after a somewhat nomadic career, I asked what has been the highlight so far?

I would say when I scored my first goal for Everton against Swansea, it was a very big moment for me, one that I could never forget.

I asked Traore how he found working under Roberto Martinez, a manager who divides opinion between Evertonians.

For me, Roberto Martinez is a very good coach, but that is football – you cannot please everyone. 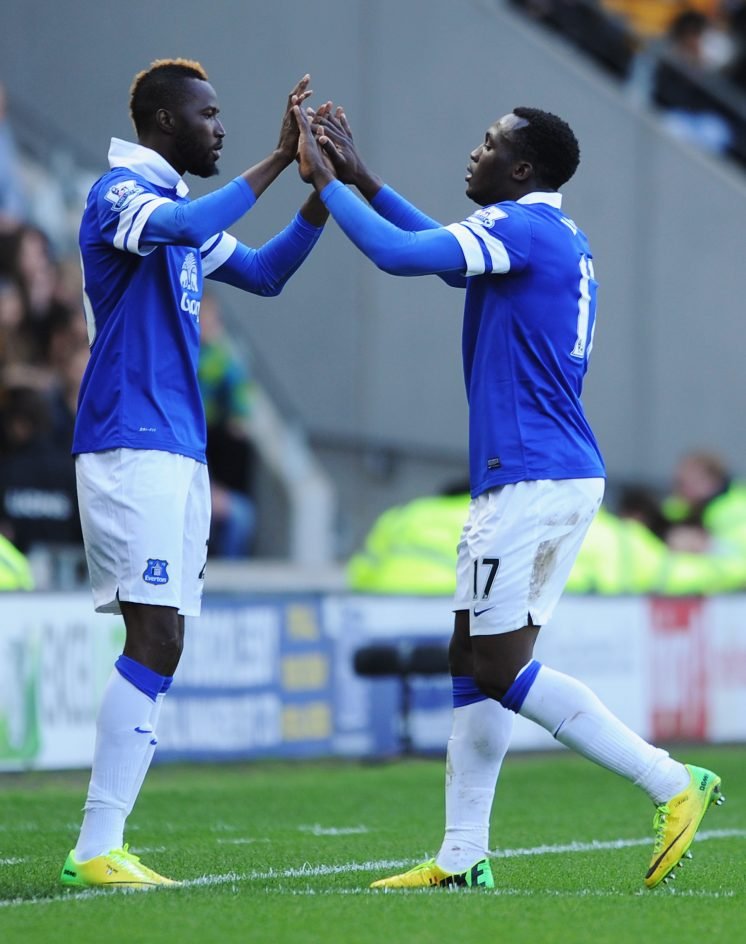 Traore was back amongst the headlines in 2018, in a remarkable story in which he was accused of having changed his name and age many years ago by Ibrahim Kone. The President of Etoile Sportive d’Abobo claimed that Traore had played for his club many years ago under a different name and with a different date of birth.

Kone was outraged and was intent on pursuing the case as FIFA rules state a club gets 5% of future transfer fees when he is developed there between the ages of 12-23 – meaning his club would deserve a slice of Traore’s historical transfer fees, which total more than £30m.

Traore, who was on loan at Amiens from Monaco at the time, hit back at the accusations and vehemently denied ever having been called anything other than Lacina Traore.

It’s incredible! My parents are still alive and they gave me this identity. He’s tarnishing the honour of my family. My parents call me all the time. They want to go and meet him, but that’s not the solution. The law will speak. And the truth will win out. I’ll never accept what he says. He can’t say I’m someone I’m not.